This writer (Mahaguru58 - he is one blogger whose writting comes out in Malaysiakini, Islamic perspectives. Oh, and if your writting is not pro-him, he will delete it. So, dun waste time posting on his blog esp. if you make effort to get the facts right) makes me hoping mad! Read here on a meeting of so called Muslim bloggers. They are the 'intellectuals" and supposedly far sighted.
"The reality nowadays is that Christians and other Kaffirs tend to zoom in and focus on the screwups by a few Muslims and then lay claim to saying that Islam is bad." - We respect the religion , but fear the worshipers and people in authority who misuse their power. And thanks for calling us Kafirs , all the time.
"... where Christians in Malaysia are prone to interfering into Islamic and Muslims affairs here since the change of leadership in the BN Government." - show me ONE example,please. Is it the one where Saiful was asked to swear by Quran and Muslim/ UMNO leaders says that it is ok to swear on the quran since Christians swear by their bible. ( which you see in US television shows but is not a Christian thingie. dumb dumber)
"I joked with MENJ about suggesting that instead of carrying a card which could get lost, maybe it would be better to have a tattoo on their chest or forehead that they are Kaffir!"- you mean, as the sign of 666? Or Harry Potter with moving graphics? Cool. 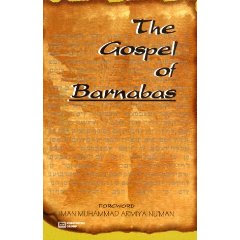 "The Christians know about it but refuse to accept the truth that the Gospel of Barnabas contains." - Church leaders and theologians have dismissed this book (wiki) and countless others, and not even part of Christian literature. Some Muslims took advantage (this website set up to propogate the views) since this 'gospel' suggest the link betwen Christianity and Islam. Here is the article from Muslim.net where it was summarized :-

"Imagine you were a Muslim who was told that someone found a lost "book" from God. Among other things, this "Sura" mentioned that Mohammed sailed on a boat to Mecca, and this Sura contradicted the teaching of the Bible and contradicted the Qur’an on ten points. The oldest manuscript of the alleged Sura was written in Italian, which is both not a Mideastern language and did not even exist in the time of Mohammed. Finally, this supposed Sura had some historical customs, which did not occur until 1,000 years later in Europe.
It is safe to say a Muslims would probably have a few questions, to say the least. Before you embrace this medieval forgery as an authentic work that shows the "real" teachings of Jesus, remember that this work contradicts the Qur’an, too."

Italian text, where wines are made in casts like old world wines and not in jars like in Middle East. (Photo)

Islamic scholars have done more studies on this book and now Christian scholars are taking a look. Both side agreed that it is a fabrication from medieval times, years after Jesus or Mohammad. If only the writer reads more than to parrot half truths.

"I for one am doing what I can within my means to clear the air about Islam and in my own way share what I have come to learn about Islam and what it really is? "- I am honestly confused if your 'good' intent of daawah ( conversion) persuaded me. I am not perfect and I do not like hypocrites. I prefer be repeatedly called a kafir. If i become a muslim, I am not a Muslim but mualaf (convert). Mualaf sounds like a bread, i prefer kafir which sounds like coffee or lime. Thanks, but no thanks.
at Friday, September 05, 2008 2 comments:
My Tags: christian, gospel of barnabas, islam, mahaguru58 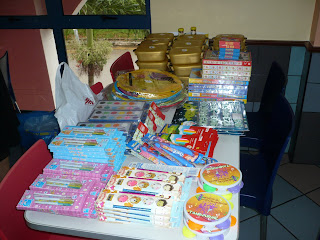 The biggest pile of gifts that I have ever witnessed. The kids was trying to grab hold properly at the end of the day as they have so much to 'jaga'. 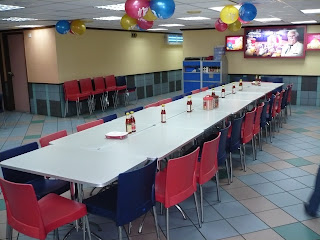 Before the hurricane, it was tranquil. KFC Port Dickson is a good choice except for the lack of size and volume in their meals. Loads of empty space for.. 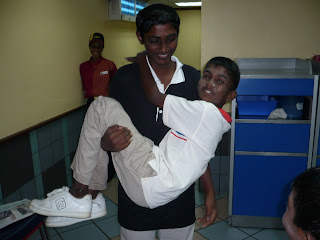 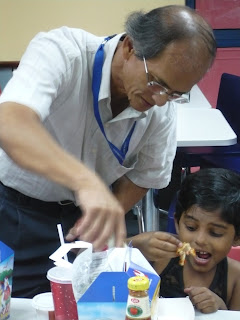 Uncle Pok Kuang being fatherly and all. 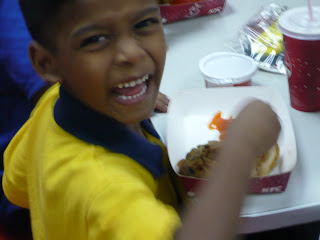 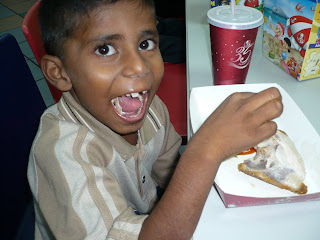 I got a bigger mouth than you! 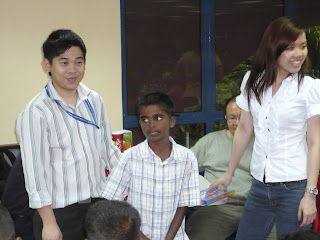 Addy's final week here & Karen doing a model thing. The kid was just trying to remember his song lyrics. The centre seemed to have a favourite song that most of the kids will sing. 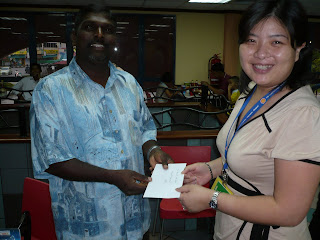 Auntie Ai Li giving some cash donation to Paul, the caretaker. The Finance team has single handedly organised this personal initiative showing that they are not only about counting monies. :) 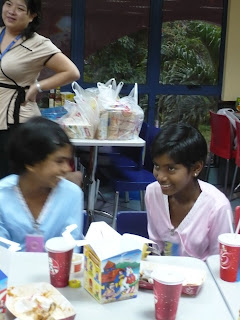 Look behind the 2 girls: That is why i called Ai Li an auntie. haha. These 2 girls are the shyiest ever as i wasted shots after shots for them. Good thing now we use digital cameras. 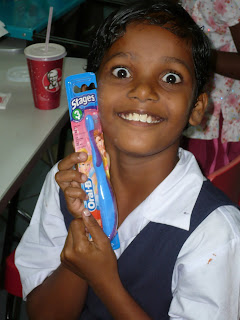 That is how I have great teeths like this! Anyway, my appreciation to all donors and lets continue to seek ways to spread goodwill and help to the needy.

If you feel rich or a tai tai who has nothing to do, or just like any ordinary man and woman .. you can bring a smile to others. Here is the contact.