How I wish that I was wrong? 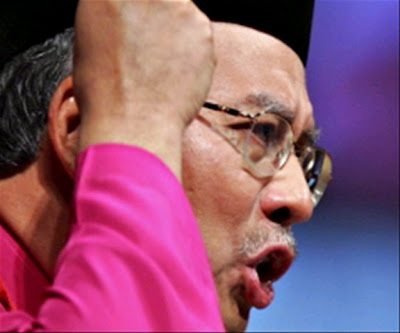 I am a forgiving person. So, when people suggest that Najib is a racist because waaaaaaaaayyy back in 1987 when he was young and positing himself to be the UMNO Youth leader, he promised to 'bathe his keris with chinese blood".. I gave Najib a bit more leeway. Reasoned that he was young, raw and being an opportunist then. You can't expect him to bathe his keris in Malay / Indian Muslim / Kadazan blood, cause it would not be 'cool'. Chinese is the enemy, the jew. That was when Musa Hitam- Razaleigh Hamzah combo was trying to be more Malay than the Indian Muslim- Chinese Malay ( Ghafar BABA- get it?) combo. After many special assignments (because of his heritage) and moving up the enchelons of power, reckons that he would be wiser by now.
Oh ... am I wrong! A day after visitings its supposed Chinese Party ally and shaking hands/ kissing and got his butt licked by Ong Kah Ting as 'berwibawa", he came out of the meeting and showcase his manifesto which would shape his plan as a PM.
“I will defend the supremacy of the Malays until the last drop of my blood if I win the mandate of the delegates to become the next Umno president at election to be held in March 2009. This is the solemn promise I made to my late father before he died”.
If anybody else that this UMNO royalty talks about blood letting, that person will be stoned and put in jail. His royalty blood is definately more important than the normal working Chinese people blood. And the Kayans, the orang asli, the cocos, the etc. are definately not important to this Najib chap as anybody who goes against him will be 'destroyed".
"I will also not hesitate to use all means to destroy elements that can threaten the stability and peace of the country.”
And here, Susan succintly detailed out our future Prime Minister in Waiting's character.
The King of Scandals and Denials. Oh, the first person who tells me how many times he swore of his innocence in his speech will win a price. haha.
Does he expect the normal-blooded rakyat to just believe his swearings? So, he thinks that he is the King of Malaysia and all lesser people will need to kowtow to his sayings and doings as in medieval times. Yes, he is the King of Scandals and denials.
at Monday, October 20, 2008 1 comment:
My Tags: Contesting Malayness, democracy in malaysia, najib, UMNO
Newer Posts Older Posts Home
Subscribe to: Posts (Atom)