Malaysia continue to pressure the natives 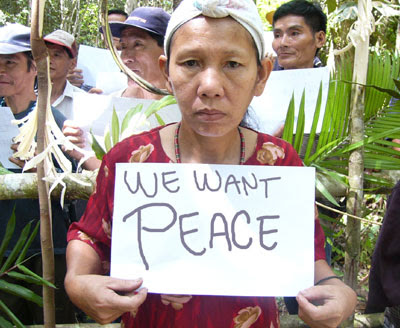 From
Life is so unfair for those who are in the dumps. The fact that Malaysia is a signatory to the UN Convention on Native rights are just a showcase without substance. Oral Asal ( aborigines ) continue to be persecuted and sidelined by the Malay-led government of UMNO they are seeking your help. (Here and memorandum)
Sarawak
Penans were the roamers of the forest in the interior of Sarawak, where the Punans are the variant of Penans who have moved to the cities. My experience in knowing them has been a mixed bag of emotions, with them asking us to visit their long ( long house). We have since give some monies to aid the long house that was burned down. Seemingly, they continued to be harrassed by logging companies tied to local politicians and subjected to the ridiculous plan to build 12 dams in Sarawak. After allegations of rape of women, a half hearted police who initially did not act on the report, dismised the NGO's report and even dare to suggest Bruno Manser( or other caucasions) is involved with inpregnating local Penans.

"Interestingly, we came across a woman in Long Kerong, believed to be not more than 30 years old, who appears to be Eurasian."
"Jalin said the police who interviewed teachers from the two schools in the area found no evidence to support the allegation." ( Just go to 2 schools and that is the truth? )
The denial was then debunked by a little known media lady who affirms that it is the "tip of the iceberg." What is the police going to do now?

Sabah
Islamisation of this state continues with repeated, perhaps purposeful neglect by the Federal Government.
Who are the “Other Bumiputera” and Other Ethnic Groups” in Sabah? According to an answer to Teresa Kok (DAP Seputeh), the PM Department said that there are 436,300 “Other Bumiputera” and 143,500 “Other Ethnic Groups” in Sabah. These constituted 25.9 percent of the Sabah population.
Read Charles Hector's analysis.
And that is not all. The covert operation will be overted thru the 'bastardized" JHEOA ( Jabatan Hal Ehwal Orang Asli) who continues to go against the spirit of its establishment. This is the department that is headed by non local natives and surely have its own partisan agenda.
Farouq Omaro
The statement by the Federal Rural Development Minister that the government may extend the Aboriginal Affairs Department (JHEOA) to Sabah is worrying.He said that the success of JHEOA in West Malaysia is a reason to have the JHEOA extended to Sabah. What success is he talking about?
I am not sure if the Orang Asli in general are as successful as the other races.The extension of JHEOA may also mean West Malaysian officers administering the rural folks of Sabah. This is also very worrying.The demolition of a number of Orang Asli churches in West Malaysia shows that the JHEOA cannot protect the religion of the Orang Asli.Sabahans should say a loud ‘No' to this attempt to place the natives of Sabah within the jurisdiction of a federal department run by non-natives of Sabah.
West Malaysia
JHEOA continues to be a lame duck with little care for the people that they are supposed to protect and champion.
The plight of a Semai Orang Asli community in Ulu Slim, Perak, over the loss of their ancestral land is likely to remain unresolved unless the current owner is willing to surrender the rights to the site in question. (Malaysiakini)
Would you want to be part of an action group to press the government and help our brethen?
Please visit and give them our support
http://pasim.wordpress.com/2008/09/12/joas-jaringan-orang-asal-semalaysia
http://orangasal.blogspot.com/
at Tuesday, October 07, 2008 3 comments:
My Tags: penan, Sabah, sarawak, UMNO
Newer Posts Older Posts Home
Subscribe to: Posts (Atom)