KUALA LUMPUR: A husband filed an interim injunction application at the High Court yesterday to stop the Federal Territory Islamic Council from claiming the body of his late wife who he claimed was a practising Christian at the time of her death.

Ngiam Tee Kong, 53, filed the ex-parte application, which also named the director of Hospital Universiti Kebangsaan Malaysia (HUKM) as the first defendant.The application filed through Messrs Karpal Singh & Co yesterday is expected to be heard today.The body of Wong Sau Lan, 54, who died on Dec 30, is at the HUKM mortuary.In his affidavit, Ngiam said when he went to HUKM to claim his wife's body, he was informed that it would only be released to him if he confirmed that she was a Muslim at the time of her death.

He was also told that the body would be released to him only for having Christian rites to be performed, after which it was to be returned to the hospital for it to be buried according to Muslim rites.Ngiam claimed that on Dec 31, a day after Wong died, he received a declaration of conversion dated the same day signed by the Federal Territory Religious Department director, stating that Wong converted to a Muslim on Dec 24 at a flat in Jalan Siakap, Cheras.Ngiam, a manager of an entertainment outlet, said the letter given to him did not state his wife's Muslim name. He said she was a practising Christian at the time of her death.He said the letter of conversion was not in compliance with the provisions of Section 90(1) of the Administration of Islamic Law (Federal Territories) Act, 1993, as it was not given to Wong before her death.Ngiam is seeking, among others, declarations that:- Wong was a Christian at the time of her death;- she did not fully embrace Islam before she died; - she was not a Muslim at the time of her death.He also wants the court to issue an order that he had the right to his wife's body and for the hospital director to release it to him immediately.
at Thursday, January 03, 2008 1 comment:
My Tags: Arab Malaysian, christian, islam, prosecution, unfair

Check for your voter registration

Update: Check out this hilarious write up about the same issue. Another Malaysian World Record - World’s Oldest Living Person . I did not understant the Election Commisions answer that these are dead voters from 1800s. Do they have IC then?

The Election commission Chairman decided that there is no need to do a by election to fill up the seat of the Labis MP Dr Chua Soi Lek who have just resigned. The Sun's write up of his interview is more candid on his feeling about the about-turn from his bosses up there. I think he felt betrayed hence relinquished all his posts inclusive of those that is won in his party ( MCA) and even as a member of parliament. Something must have triggered it & his rantings on "holier than thou" should give some clue. The most interesting aspect of the interview is his decision to challenge the incumbent president to the top post as well as to challenge him to live up to his 'live a clean, healthy life". This signals undercurrents in MCA.

Anyway, it also points out to our EC chairman's knowledge of the date of the election ... or erection ( aftermath of Dr Chua's sordid affair). So, do verify if your name is in the list of voters.
Click here: http://daftarj.spr.gov.my/daftarbi.asp
If an 10 year old kid can be a voter, why not you? 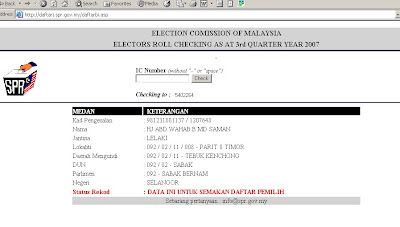