Daily Application: It is good to ask the back seat occupants in your car to buckle up. Safety surely saves souls.
Personal narration and photo by Razif Rashid.
I witnessed a horrific HSSE incident yesterday which I really feel I should share with you.
This incident occurred at the Le-Meridian Hotel in Kuala Lumpur, just opposite the main entrance of the KL Sentral transportation hub. I had just arrived at the main entrance of KL Sentral in my car. I was 4.25pm, 2 Sept 2008. Hardly a few seconds after I moved my car to the side and stopped to answer a call, a number of objects fell from the Le-Meridian Hotel side onto the middle of the road next to my car. This was followed by a larger metal piece. It was extremely fortunate that no vehicle or person was in that place when the objects fell. But that was only the beginning of the incident. I heard some noise from above, from what I presumed was the source of the fallen objects. 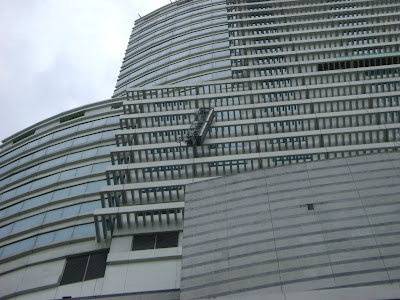 When I looked up, I saw that it was the moving platform that is normally used to clean the windows of tall buildings was just giving way on one side. To my horror, a moment later, a man fell from the now tilted platform at what appeared to be the 7th floor of the building. On the way down, he hit the side of the building. When this happened, pieces of flesh came down on the road where the metal pieces had earlier fallen on the road. (photo below) 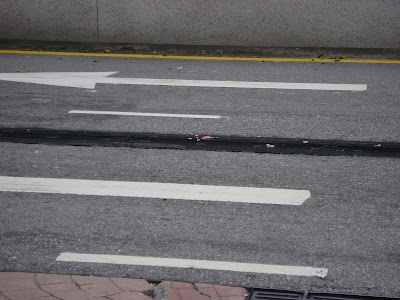 A few seconds later the falling man smashed into what I think was the elevate lobby driveway of the hotel. I heard a thump and could see a spray of bright red blood from where I was. I cannot imagine that he would have survived the fall. I did however notice as he fell that the man was not wearing a safety harness. I feel really sorry for the man who most likely lost his life yesterday, and I cannot help think that a simple act of wearing a safety harness could have saved his life and a lot of grief for many people. I cannot help but wonder if his supervisor had bothered to ensure that all the necessary safety precautions had been taken so that he could perform his job safely.
I will never forget that moment seeing the man falling helplessly. I hope never to have to see or hear about a similar incident again, especially if it involves anyone I know.
The message is simple : Never forget to comply to HSSE rules and regulations. They are there for good reason. It is not just about meeting KPIs, it is about peoples lives.
at Thursday, September 04, 2008 2 comments:
My Tags: Kuala Lumpur, Le Meridien, Safety, safety harness
Newer Posts Older Posts Home
Subscribe to: Posts (Atom)