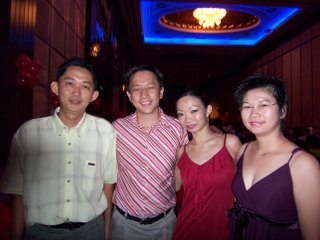 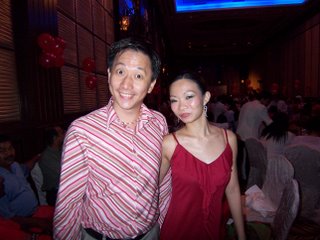 Yo, so ... update on my new company. pretty cool that in 3 weeks , there are so many events that has happened. First , have these dinners for hari raya and Deepavali. and it was rather cool as it is done in the Kerang Sports Club that overlooks the sea. At sunset and during the night, there is this spot there that is too heavenly beautiful for couples. of course, i only imagines.

and we had the family day at a place called Angkasa. did not go as it was the first saturday that i was here.

but was in Sunway Resort when we had the annual dinner. with a simple theme called the Simply Red , it was quite a daring motto for us. Well , for a company that has a big percentage of men .. i guess it can be termed as 'daring'. i wore my pink candy cane shirt here. hohoh

The best act for the night is by this group called Reggie and the flintstones.. or something like that. they were very funny , and it was just pure fun hearing Reggie talk. He seemed to be around the clubs as some of the 'older' generation can identify him and knows that he was the 'hot stuff' last time in Damansara clubs.