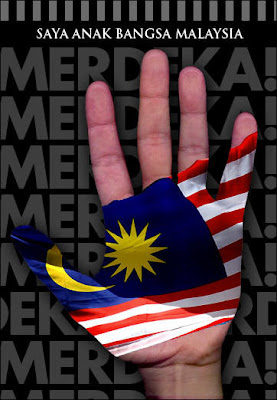 Technically, we are only a nation in 1963 , but lets not think about such things as we are to be followers. Apers... not apes. Definately not human who thinks.

Am in Port Dickson this year to celebrate our national day celebration alone. For a man who thinks himself as a patriot ( not Chinese Chinese but Malaysian Chinese ) and a determined fool of fairness and peace, these last 5 years have been tough. I resovled to work for Malaysian companies after my graduation to contribute to my nations' development. In reality, the glass ceiling seemed a bit lower than I think. :)
I was working late because I do not feel that there is a cause celebre. Especially when we are told that the current administration define itself as Era Kecemerlangan ( Excellence Era), the pinnacle of Malaysian civilisation where other countries go about centuries before even thinking about greatness. What happen after cemerlang ah?
Still have to take one day of annual leave if want to deal with these 'Cemerlang' government agencies. "Niamah"
Anyway, my comfort at almost 1200 a.m. is to be comforted by my hot nasi lemak and egg. Then come the face of Khairy Jamaludin ( Son in Law of Abdullah ) who gets the pleasure of raising the Malaysia flag causes me to loose apetite. Why him?
Soon, boys on kapcais ( small motorbikes) with loud exhaust pipes goes wild in the streets of Port Dickson making a nuisance to the already crawling traffic. Other days they will be called Mat Rempits, the 'eyes and ears' of Khairy J. No police to be seen as i guess they are in Putrajaya manning the fireworks display.
Third observation is that I am the only Chinese around the stall. The sense of loneliness is factuated by the reality of increasing pluralism in our society that my presense is so obvious vs oblivious. How I wish race and religion differences can be accepted and celebrated.
All in all, I will still pray for my country. Thank God that in all hopelessness, there is hope in Him. For our hope is not in the things that can be seen, but unseen.
at Sunday, September 02, 2007 3 comments:
My Tags: 50 years, hope, independence
Newer Posts Older Posts Home
Subscribe to: Posts (Atom)