First time in You tube

Finally , got some of the movies into you tube. this is fun. enjoy

http://www.youtube.com/watch?v=c9SDWQqf8WE
at Thursday, March 29, 2007 1 comment:
(Letter from a fund raiser for George W Bush's monument )
Dear Friends:
I have the distinguished honor of being on the committee to raise$5,000,000 for a monument of George W. Bush. We originally wanted to put him on Mt. Rushmore until we discovered there was not enough room for two more faces.

We finally decided to place it beside Christopher Columbus, the greatest Republican of them all. He didn't know where he was going, and when he gotthere he did not know where he was. He returned not knowing where he hadbeen, destroyed the well-being of the majority of the population while he was there, and did it all on someone else's money.
Thank you.
George W. Bush Monument Committee(so far we have collected $1.35)

Miri - an oilfield of experiences. 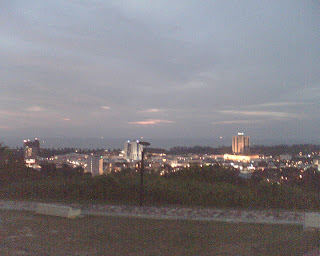 View from Canada Hill, the romantic hotspot of Miri. A few couple were caught and banished to the outskirts. 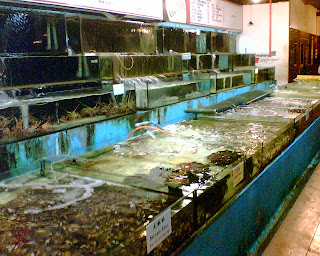 Ocean Paradise - not cheap but filling food. And lots of fish to watch. 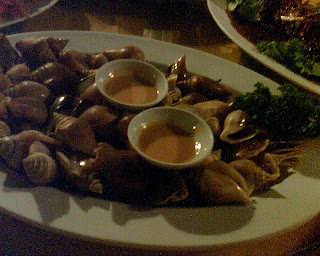 A different kind of molusca - tastes funny , but was happy with the shell. 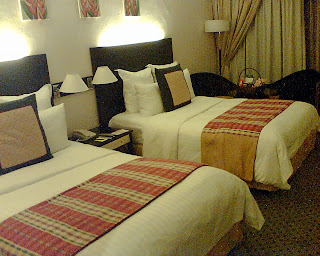 Marriot has the BEST bed that i have ever slept on. It was hard to leave the bed. 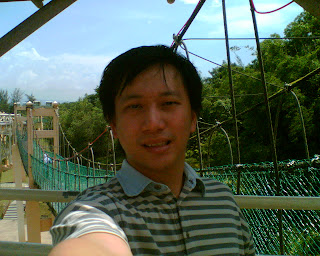 Here is to 10 minutes away from entering my 10th country- Brunei. Miri is accross the boarder from this Sultanate. Too bad not all of us brought our passport along. Me posing at the hanging bridge with immaculately kept greeneries. Sarawak is indeed a clean city, better than any of the peninsular city yet.
at Friday, March 23, 2007 No comments:

Interesting nooks and crannies in Kuching 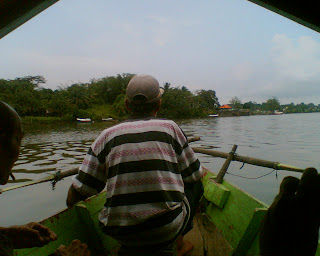 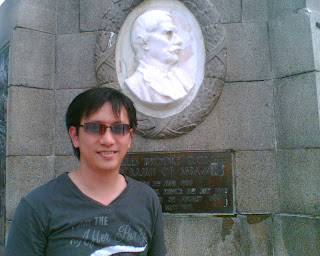 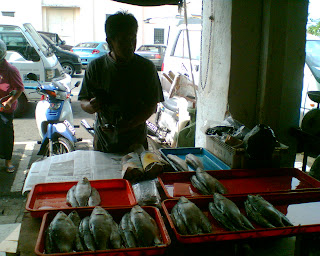 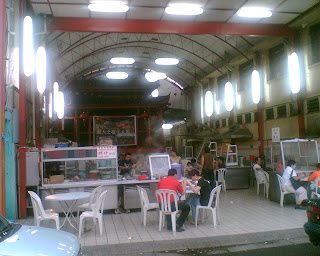 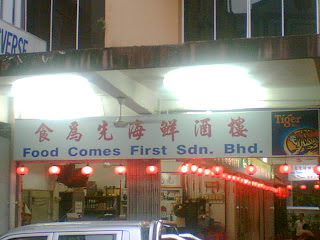 1. Along the Kuching river scouting for crocodiles. This gentlemen loudly proclaimed that he has 2 wives. Btw, our bahase Malaysia is useless in uncovering bahasa sarawak.
2. Joe and James Brook , the Rajah of Sarawak. I was the Raju.
3. Smelly terubok fish. We bought a whole packet of 12 fishes that smells all the way to Miri and KL.
4. Notice the temple hidden behind the food court? Now, that is called fusion food.
5. Oh, and what comes later?
at Friday, March 23, 2007 No comments: 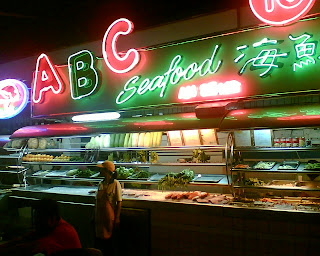 Simple as ABC, but tastes heavenly 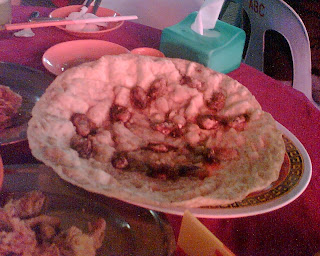 Crispy Pancake with oyster. The worst of the lot. 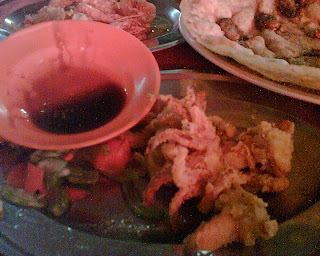 Squid with honey. The butter prawn tastes even better 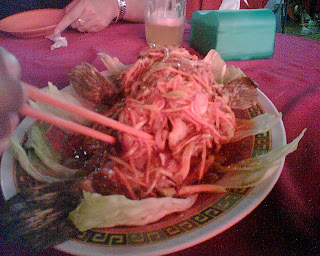 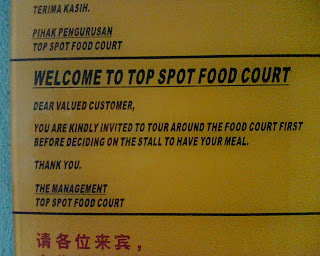 And they are even courteous. Please be fair to all restaurants and check them out first.

It is an amazing feast. The best seafood that i have tasted. And it costs RM93 ringgit only!!!
Certaintly top spot in my stomach!!
at Friday, March 23, 2007 No comments: 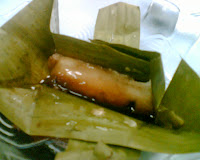 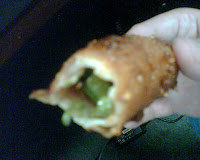 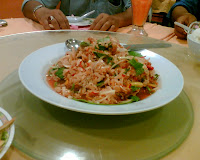 Sibu, a tranquil town but with hot desserts. Here are a few favourites from my trip there. It is surprisingly a bigger town that Port Dickson. A coconut sweat treat, a chee cheong fun with beans and umai ( fish with chile and lime ) 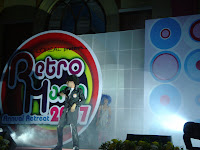 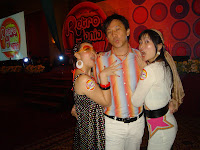 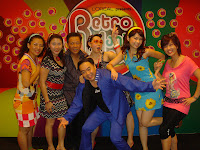 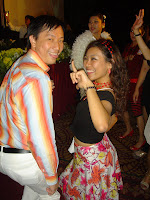 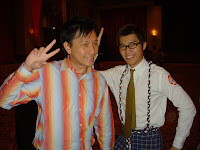 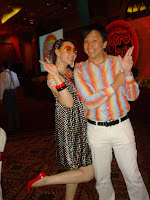 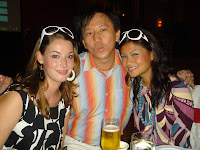 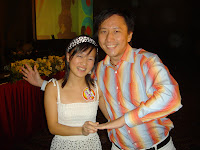 Well, how did I look trying to be retro? not good i guess. But the rest of the people dressed up much better and it shows. :(
at Friday, March 23, 2007 No comments: 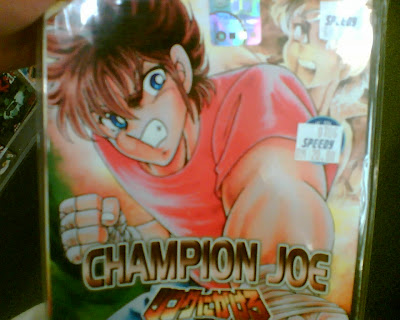 Between 300 and Muah Po U Tube

I watched the latest movie called 300 , where supposedly 300 Spartans took up arms to defend their freedom against the regime of Persian , lead by a gay-like Nubian cross dresser who is supposed to be Xerxes. Beyond modern CG look and good chereographed fighting scene, this movie is one to forget. I nearly felt asleep if not for the various inconsistencies and racial profiling & blasphamies that happens in the movie.

I will speak up against the grand plan by US to distort truth. The sad truth is that this show is supposdly funded by an American organisation on behalf of the government for whatever reason. One speculation is to moralize the unjust war of Iraq. One writer asks - Who do you think George Bush is - Xerxes(bad guy since he is potrayed to indulge in all kind of bad things ) or Leonidas( defender of truth & democracy)? Since he is American , his answer is Leonidas.

My answer - The person who ..
1. Leads a huge army with many secret weapons , including a rhino and elephants ala Lord of the rings.
2.Killing own people to achieve own goals.
3. Think that he is God , if not acting for one.
4. Attacks another country in the name of progress.
5. Nobody is as powerful and right , never wrong.
6. No leadership skill except in giving threats and grunting.

Anyway, here is to racial subjugation part of the movie. The unspoken intent of the story is to tell people that it is a shame to be beaten by people from the East. And i find it very racist.
1. Xerxes is like a cross dresser instead of a strategist in real life.
2. Most of the Persian bosses are black , and the first to be killed .. .. mainly for rough talking.
3. The Persians looked like caravan Muslim Arabs
4. The Japanese is ugly, short and wears a samurai costume.
5. The Chinese is ugly , short and throws bomb that never hit nobody.
6. The indulging orgy party as mainly of anything Asian women. Cheap , obliging & dumb. Contrast that with the working Greek women who can even speak at the council.

Since when it is ok to mock a gay, cross dresser , black, asians, animals, women ... Oh ya, we are barbarians. And, the blasphemy of using quotes from the bible to describe Xerxes as King of Kings, Lord of hosts, etc.
And don't give the reason that it is adapted from comic book and uses computer graphics to substanciate such degrading movie.

btw, this is better than the show.. a song about Muar . check it out.
http://www.youtube.com/watch?v=nmmjPbYU1og
at Wednesday, March 14, 2007 5 comments:
Newer Posts Older Posts Home
Subscribe to: Posts (Atom)