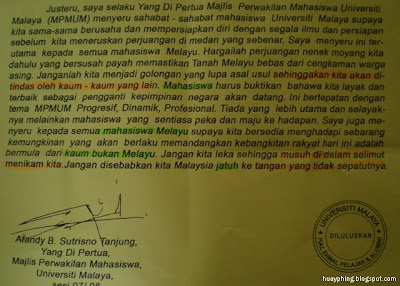 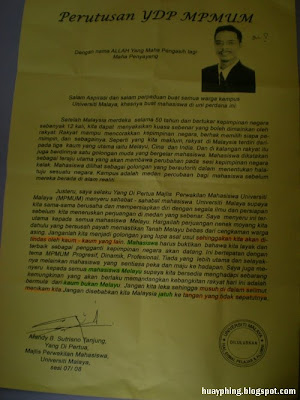 Translation from Malay Language to English
Therefore, I as the Head of Graduates of University of Malaya would like to advice all our fellow graduates of University of Malaya to combine forces and prepare ourselves together with all the necessary knowledge and preparation before we continue our fight in the actual battle field. This advice implies mainly to our Malay Graduates.
We must treasure the sacrifices made by our ancestors which tried so hard to ensure that Tanah Melayu ( Malay Land ) is free from the intrusion of alien races. We must not fall into the category of those who forgets their roots until they will be taken over by other races. Graduates must prove themselves that we are capable and the best choice to take over the throne of governing the country in the future. This implies with the theme of MPMUM Progressive, Dynamic, Professional. There is nothing more important that can compared to our always-sensitive and improving Graduates. I also would like to advice all Malay Graduates to prepare ourselves to face all eventualities in near future, seeing that most of the issues are raised by the non-Malay races. Don't let ourselves to slack and allow our 'enemies under the blankets to attack us' (direct translation from the Malay idiom). Don't allow 'our'(Malay) Malaysia to fall into the hands of those who are who are not entitled to it.
I hope this is not a call for people to 'prepare' to physically fight those nasty 'other' race. It is always the other races that is weaker, more terrible, evil , lousy than your race.
I wonder why this gentlemen thinks that he is greater than others, since he is the 'head' of the political system in University Malaya. Maybe he feels that he has reached the pinnacle of power. I hope he does not forget that the 'real' world nowadays are borderless and what he does in the power tower will be documented and available for his potential employers. For those in Malaysia, you would note that his name (and his father) sounded Indonesian. If we can accept Indonesia and morphed them as Malays, I hope he can accept others as well.
With UM raising back to the top 200 universities of the world ( 180 ranked) , I wonder if the committee would be interested to know if the university is able to create real quality graduates. Really shameful.