The Bombing of Nagasaki August 9, 1945: The Untold Story

62 years ago, on August 9th, 1945, the second of the only two atomic bombs (a plutonium bomb) ever used as instruments of aggressive war (against essentially defenseless civilian populations) was dropped on Nagasaki, Japan, by an all-Christian bomb crew. The well-trained American soldiers were only "doing their job," and they did it efficiently.
It had been only 3 days since the first bomb, a uranium bomb, had decimated Hiroshima on August 6, with chaos and confusion in Tokyo, where the fascist military government and the Emperor had been searching for months for a way to an honorable end of the war which had exhausted the Japanese to virtually moribund status. (The only obstacle to surrender had been the Truman administration’s insistence on unconditional surrender, which meant that the Emperor Hirohito, whom the Japanese regarded as a deity, would be removed from his figurehead position in Japan – an intolerable demand for the Japanese.)
The Russian army was advancing across Manchuria with the stated aim of entering the war against Japan on August 8, so there was an extra incentive to end the war quickly: the US military command did not want to divide any spoils or share power after Japan sued for peace.
The US bomber command had spared Hiroshima, Nagasaki and Kokura from the conventional bombing that had burned to the ground 60+ other major Japanese cities during the first half of 1945. One of the reasons for targeting relatively undamaged cities with these new weapons of mass destruction was scientific: to see what would happen to intact buildings – and their living inhabitants – when atomic weapons were exploded overhead.
Early in the morning of August 9, 1945, a B-29 Superfortress called Bock’s Car, took off from Tinian Island, with the prayers and blessings of its Lutheran and Catholic chaplains, and headed for Kokura, the primary target. (Its bomb was code-named "Fat Man," after Winston Churchill.)
The only field test of a nuclear weapon, blasphemously named "Trinity," had occurred just three weeks earlier, on July 16, 1945 at Alamogordo, New Mexico. The molten lavarock that resulted, still found at the site today, is called trinitite.
With instructions to drop the bomb only on visual sighting, Bock’s Car arrived at Kokura, which was clouded over. So after circling three times, looking for a break in the clouds, and using up a tremendous amount of valuable fuel in the process, it headed for its secondary target, Nagasaki.
Nagasaki is famous in the history of Japanese Christianity. Not only was it the site of the largest Christian church in the Orient, St. Mary’s Cathedral, but it also had the largest concentration of baptized Christians in all of Japan. It was the city where the legendary Jesuit missionary, Francis Xavier, established a mission church in 1549, a Christian community which survived and prospered for several generations. However, soon after Xavier’s planting of Christianity in Japan, Portuguese and Spanish commercial interests began to be accurately perceived by the Japanese rulers as exploitive, and therefore the religion of the Europeans (Christianity) and their new Japanese converts became the target of brutal persecutions.
Within 60 years of the start of Xavier’s mission church, it was a capital crime to be a Christian. The Japanese Christians who refused to recant of their beliefs suffered ostracism, torture and even crucifixions similar to the Roman persecutions in the first three centuries of Christianity. After the reign of terror was over, it appeared to all observers that Japanese Christianity had been stamped out.
However, 250 years later, in the 1850s, after the coercive gunboat diplomacy of Commodore Perry forced open an offshore island for American trade purposes, it was discovered that there were thousands of baptized Christians in Nagasaki, living their faith in a catacomb existence, completely unknown to the government – which immediately started another purge. But because of international pressure, the persecutions were soon stopped, and Nagasaki Christianity came up from the underground. And by 1917, with no help from the government, the Japanese Christian community built the massive St. Mary’s Cathedral, in the Urakami River district of Nagasaki.
Now it turned out, in the mystery of good and evil, that St. Mary’s Cathedral was one of the landmarks that the Bock’s Car bombardier had been briefed on, and looking through his bomb site over Nagasaki that day, he identified the cathedral and ordered the drop.
At 11:02 am, Nagasaki Christianity was boiled, evaporated and carbonized in a scorching, radioactive fireball. The persecuted, vibrant, faithful, surviving center of Japanese Christianity had become ground zero.
And what the Japanese Imperial government could not do in over 200 years of persecution, American Christians did in 9 seconds. The entire worshipping community of Nagasaki was wiped out. 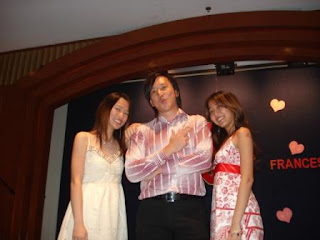 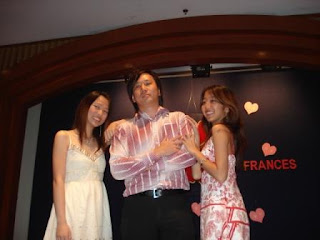 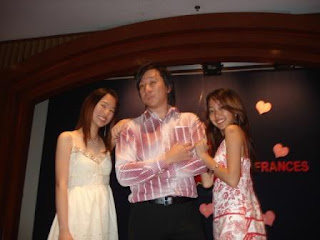 Well, it got worse and worse... even worse is that i just notice Charis' bukak her armpit...
I think I have another pose. Remember that guys-pee-at-different-location shot? Well, this is the James Bond between a girl pose. I just don't know why girls like to pose like this with me. (Ahem!) . Here is the latest try with Tee and Charis.. see, they are not even trying to look like Bond girls. Retake!!
at Thursday, August 09, 2007 No comments: 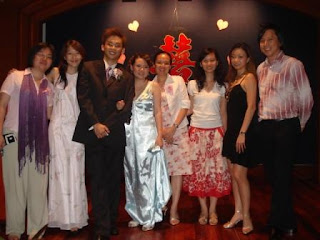 I think we look pretty tired , except the couple. They are excited. 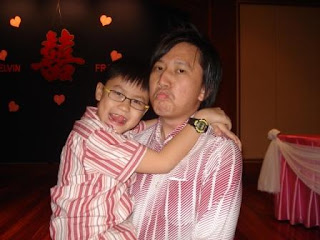 Lil Kel and me with funny faces. 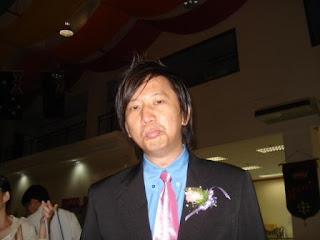 Funny faces for lil Kel. why the same face la? 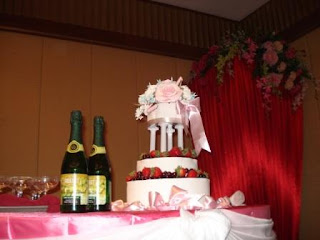 Nice home made cakes. I stole some grapes. 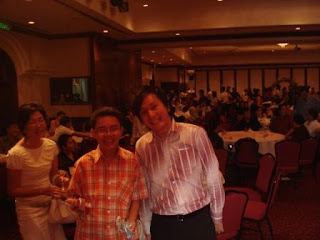 Notice Lilian behind trying to kacau...
Among my church's young adult , both of them are the frontrunner. We just run anywhere else. he.
Of course, me was the BESTer MAN. Drove an Alpha Romeo 164 Silver. yummy car.
at Thursday, August 09, 2007 No comments: 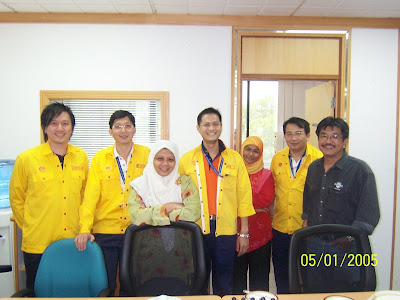 So popular he is that he got a whole department up just to wish him. Hey, welcome to 30s club.
at Thursday, August 09, 2007 No comments:

My personal belief is that

1) Love the sinner , not the sin.
2) This is the end time where "every man is right is his own eyes". ( esp. if u are American called Bush :) )
3) Homosexuality is not in God's approved list.
4) Homosexuality is not the main source of AIDS epidemic.
5) Describing your sexual encounter with boys in a book- gross.
6) Is there something funny with Sin Chew Jit Poh?

A friend just sms Ou Yang's protege and here is his reply---
sms-es fr:Irene: pls don't have gay churches in msia. God made adam n eve, not adam& joe
Joseph: u got d wrong ppl, pls fwd ur concept of church to oyoung wenfeng017-49504950, u shld remain in d church 4 adam & idiots
Irene: i'm sorry. but how is it that you number is circulated?
Joseph: M only responsible 2 tell direction n time, not gay, no gaychurch, but like 2 help ppl in need 2 know God, anyone.
No reply from Oyoung.

Btw, we are not the same Joseph. I dun call women as idiots.

Gay Church in Malaysia?
I write this mail to you with a grieving spirit. Some of you may have known about a Malaysian gay being ordained as pastor in USA. His name is Oyoung Wen Feng, a journalist as well as a columnist for Sin Chew Jit Poh, Malaysia.
Oyoung have been wrting articles on Homosexuality since 5 years ago. He spoke on behalf of the homosexuals as well as the lesbians. He claimed that the bible did not say homosexuality being a sin. If you think it is a sin, then you have actually misinterpreted the bible! Over the past years, some writers, including myself, have written several articles to refute him, and were published by Sin Chew. But unfortunately, for the past 2 years, Sin Chew refused to publish our articles!
At first the readers thought that Oyoung was a hero speaking on behalf of the weak. But about one and a half years ago, he openly admitted in his column that he was a gay. And at the same time he published a Chinese book entitled "God Loves Gays". In his book he revealed his story for having sex with a few guys.
Last year, Oyoung divorced his wife of 7 years, claiming that it was a mistake to marry her since he was a gay.
We christians have no platforms to speak against him when Sin Chew refuses to allow us to voice out. Could you believe me? The boss of Sin Chew, Zhang Xiao Qing, is a christian!!! What will be the boss' fate for condoning such an evil? Only God knows!
Could any organization please pressurize Sin Chew? Believe me, evil is looming large in Malaysia if churches in Malaysia ignored his deeds!
Because Oyoung is bringing his senior pastor, Rev. Troy Perry, over to Malaysia to launch a gay church!
On Aug 11 is Q & A time for people who are persecuted as gays and lesbians. On Aug 12 is Sunday Worship. Venue: Grand Olympic Hotel, KL. Co-ordinator: Joseph, 012-2087 949. News about the meetings was published in Sin Chew on July 29 & 31.
Oyoung thinks this is America, and we could do everything freely like America. He wants to turn Malaysia into another Sodom & Gomorrah. The reason that he is so bold to confront the Malaysian churches because our leaders usually don’t want to be so-called “busybody”!
The consequence is: more people are getting HIV, and souls won by them would head for hell!
A few of us are trying to do something to stop the 2 meetings. You can do your part in these manners: 1) Praying for us. 2) Send an sms to Joseph. 3) Give a call to Sin Chew and speak to the Executive Editor: 03-7965 8888, or editorial@sinchew.com.my
Thank you. God bless you.
Rev Allen Tan

Oh sure, loads of politician are banging at this poor Muar chap for coming up with a rendition of our national song that includes comments on issues facing us. From our love of durian , to the 'big fish in small pond" policy of breastfeeding certain segments of our population.

Check it out and enjoy