In search of food

Could not sleep the last 2 nights. It is a combination of the ruckus down my apartment at early mornings and also knowing that I missed something out. Yes, the important food aspect. For the record, I DID NOT eat anything gross in Sydney in the effect that i could not find anything there that fits. It is also harder to find the Aussie staple - fish and chips in Sydney than in Melbourne. Is this the sign of a cosmopolitizing city? 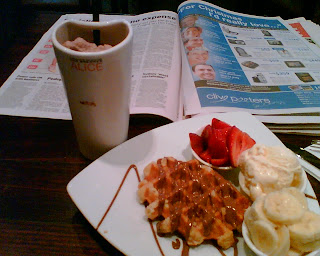 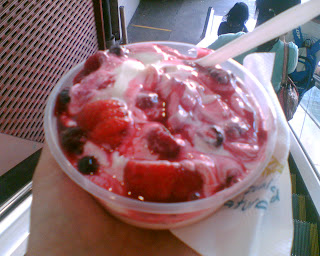 Berries yogurt on the go. Was going down the escalator to walk to another area. I had 2 yogurt food that day as it ain't cheap. N there aint nobody to cafe with me. Mix of strawberries, raspberries, wildberries . Nice but looked bloody. 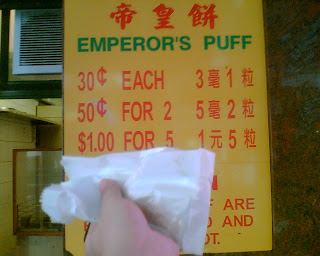 Hot emperor's puff at Chinatown consist of dough and egg custard. Pipping hot and goes in pretty well. Was doing the goldfish while walking. 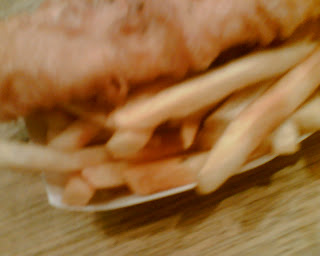 Finally found my fish and chips at one of the 2 fish shops in Bondi Beach. Loaded it up with vinegar but a tat bland. THe portion is humongous even to fit the phone camera. 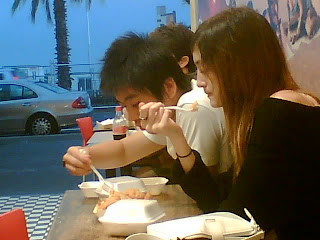 The china bloke with an Australian sheila. I was hoping this is not their first date... u know. Strewth !! 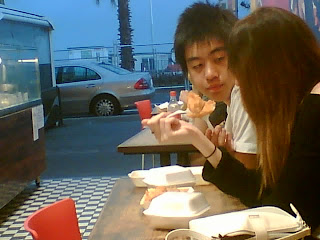 She was much more happy after digging in. Phew, i guess this chap still stand a chance. But when they stand to leave the shop, I notice that she was standing 1 and a half head taller than him. Well, love can be vertically blind... u know.. 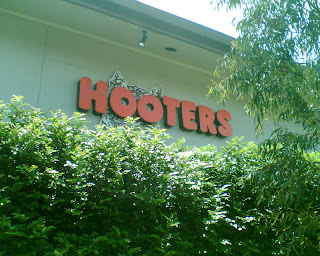 Oh yes, we had a wonderful Italian dinner for 3 nights in a row. Should try out this place called Critini's in Paramatta. The best Italian i had over here. One more at the Rock called the Italian Village which has a nice ambience and the last one called Sicilian , Parammata which I regret. Anyway, just to note that there is a HOOTERS in the small town of Parammatta. Just for the record, interested to try at least once but did not go. ahem ... You can check their records. I think this is a joint for truckers. 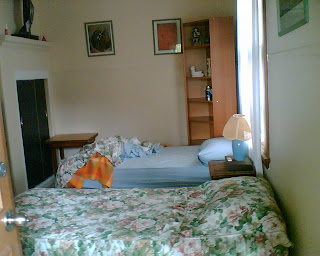 My first night at an Aussie neighbourhood of Henne. At AUS72 per night that includes outside bathroom and some cereals for breakfast, I wish that another person is around to share the heat. Look at the lonely bed beside mine. The neighbourhood is very quiet and so is the house. Any noise can be heard miles away so i have to watch TV very softly. Owner is an Australian married to a Guandong lady. 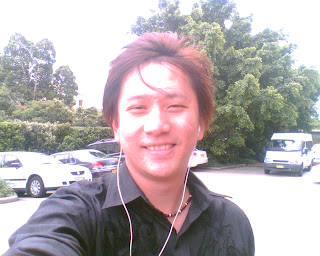 At the Rydges Paramatta carpark while waiting for taxi. Taxi is a scarcity in this town so we can have more time to do other things while waiting. 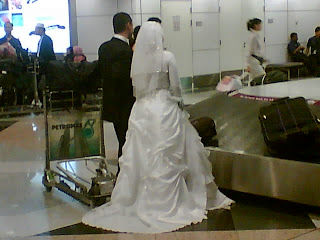 Upon arrival at KLIA, was shocked to come back to reality of Malaysian efficiency. The baggage line was broke and just started moving again. Millions of people were waiting and obviously some decided to get married while waiting. So, waiting for taxi in Parammatta ain't too bad. Do need to remind our Tourism Ministry to inform tourists to change out of their wedding suits before coming over. But knowing our tourism minister, he would probably ask for more money to do this simple thing....
Here is my letter to the Malaysian press which surely will not print it. ( cause the newspaper belong to the same political party that this chap belongs too. )
Refering to the report by your newspaper on Sunday that Deputy Tourism Minister Datuk Donald Lim Siang Chai requested and obtained an additional RM170 million in budget for 2008 in addition to RM850 million allocated, bringing the 2008 budget of the single deparment beyond the RM1 billion mark. We have spent close to RM1 billion this year to obtain a projected 'revenue" of RM44 million. (http://web7.bernama.com/events/tmm2007/news.php?id=297871) and even the figure is an estimation. I would trust that the ministry have done its accounting well but just could not understand the logic of extending "Visit Malaysia Year 2007" into 31 August 2008. Does it mean that we will continue our VMY2007 banner and advertisements well into 2008? We might be the first country in the world to have this unique campaign!

The ministry can at least do a review of its strategy & be creative to target the tourist ringgit. It can remarket it as "50th Year Celebration", " 50 years of existance" or continue on with the "malaysia trully asia" branding with a twist. Singapore have come out with a new campaign to target weekend family tourists and Hong Kong have redefine itself to capture more tourists during winter. Both countries obviously have done their homework in defining target areas and then their strategies and plans. So it is more alarming that the minister were only able to justify the request by using the latest demonstrations as the reason. There are many things that one can do effectively without spending money by being creative. We are asked to be creative to stretch our ringgit during this time and certainly leaders need to lead by example.
at Tuesday, December 18, 2007 3 comments:
My Tags: Bondi, critinis, Datuk Donald Lim Siang Chai, emperor puff, food, hooters, italian village, max brenner, paramatta, rock, sicilian, Sydney, The Star, visit malaysia
Newer Posts Older Posts Home
Subscribe to: Posts (Atom)