Is it ok to suggest killing of an assembleyman? 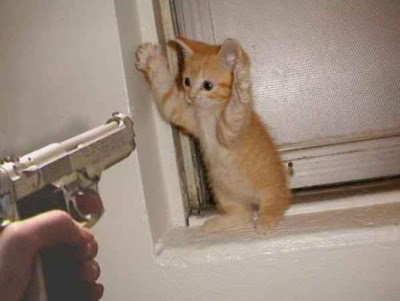 Photo from
In its paranoia to defend itself, Utusan Melayu has created the first rate offence that even decent newspapers in third world countires are not able to do, suggest the killing of an assembleyman to the public. Utusan Malaysia is a daily newspaper that is well read by Malaysians of Malay ethnicity and is owned by UMNO who are facing a credibility challenge. So far, this newspaper is infallible, uncontestable and seemed out of reach by law due to obvious reason.
The public feud between Utusan Malaysia and Teresa Kok has taken a criminal outlook with the newspaper actively or at least abetting the creation of a writting that has the female character killed in the end by a disenchanted youth to protect the Malay and Islam. The female character was named YBJ ( Member of Parliament Josephine) with almost exect circumstances as YB Teresa Kok.
Does Islam and Malay require protection using gun and violence?
I like to believe not. If the Muftis and Malay leaders are silent on this, it will be viewed as a consent and agreement to use force as suggested by this irresponsible writer. Rationale and right thinking Malaysians should stand up against such force de jour. The Malaysian police are already not giving any protection to this lady, and we do fear for her safety.
Utusan Melayu has claimed to champion the Malay agenda. It has written an article that resulted in Teresa Kok being unjustly jailed under Internal Security Act. Even Rocky Bru tried to defend this newspaper, incurring a record number of responses in disagreement. Would this article resulted in Teresa Kok being injured or maimed? If Utusan can be let off the first time, it could too on the second transgression. And this time, it may cost Teresa more than her liberty. Malay agenda should not be promoted above the cost of private independence and the right to live.
at Wednesday, October 15, 2008 5 comments:
My Tags: rocky bru, teresa kok, UMNO, utusan melayu
Newer Posts Older Posts Home
Subscribe to: Posts (Atom)