Hishammuddin does not need to apologize again. 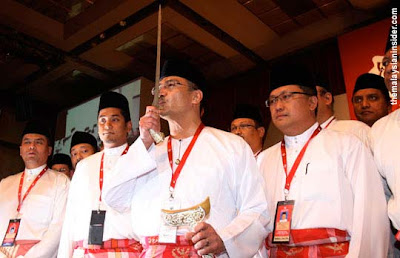 Photo : Choo May May

I hope someone clean this first! Muacks ...
He started it in 2005 and refused to do otherwise for another 2 years.

A half hearted attempt to apologize IF the non Malays were insulted by the sabre rattling. It was not an apology yet the people that the words are spoken against were able to want to forgive.
Hishammuddin moment was one of the visual of the arrogance of UMNO on its 'apartheid' styled Malay Superiority movement for the 2008 General Election.
After 1 year of soul searching and a new PR campaign that did not get him the sufficient vote for the UMNO post, he is again using the UMNO youth assembly to speak virtoil rethorics of race and to unsheath the keris again. And nobody else should critize him for he is just following an UMNO youth "tradition"; consciously left out that this tradition started only in 2005 after a succesful triumph in 2004 general election. In the process, making the UMNO members happy that he is as Malay as ...uhmmm... Najib and not bow down to the non Malays who are the root of all evil as per his speech.
He can kiss the toilet bowl if he wants, but to do the same in the context of a racist message does not bode well for a civil engagement. He claimed that he is the same mold as his grandfather and his father in doing the right thing for the rakyat. He is a disgrace to Dato Onn Jaafar and Tun Hussein Onn by trying to ride on their work. ( Come to think about it, Najib is plagiarizing Tun Dr Mahathir ... what a similar approach. Wonder who is their PR man)
I seriously suspect his sincerity and do not trust his lies anymore.
Talk is cheap, and Hishammudin's words is not consistent with his behaviour.