A friend of mine is going there for a teambuilding session. So , i checked out the official website. Qingdao International Beer Festival :: Aug. 11th - 26th 2007 -that should be fun. Then I notice that the place is as hot as Malaysia and people there smokes a lot... Hope nothing is burning and that they will put out the fire before Olympic starts. Feel like Malaysia when choked by Sumatran fire. 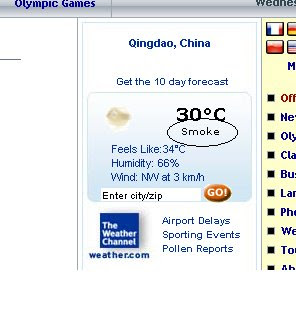 What happen if you are an inborn talented musician who loves the country so much that you wanted to share your opinion on what can be better ..... and you are born in Malaysia?

You sing about love , and divorce ( or marrying younger things or more wives - that seemed like an OK topic to talk about ) ... and anything else that is 'less controversial'.

Student Chee Weng Chee , a fellow Muarian ( and i guess the most infamous Muarian- given the skewed publicity that he is getting ) stands to loose his citizenship if he does not apologize to the politicians and wannabies for making a rap video and posting it on You.tube.com . Initially a non-event until MCA politicians and their media start gabbing about it thus making it one of the most viewed videos. Talk about stabbing yourself on the foot.

I have seen the video and i think it is one of the best local house music video. Excellent video, excellent rapping ... proud of this chap. I am very sure that those who kept talking about this may not even know how to access you.tube or seen this. The message is strong , yet the song is about his perspective. He could have toned it down and do it like a ass-kissing MCA politician, yet that is not him.

He is gruff , he is hardcore. See his previous works and you will know. So, to the politicians who spend so much time on such an unimportant issue, here is the award. It is better to have this controversy that the one about Port Klang FTZ fiasco, where the same party seemed to be strongly involved.