Sin Chew daily got a scoop when its reporter caught departing Selangor adminstration of shredding. No mainstream newspaper carried this story, yet. Then Khir Toyo(L), denied the allegation after sounding his war cry.
But he denies saying: “It’s not true. I have everything in details. We have been transparent and we have nothing to hide. If we are corrupt, why were we awarded the Sijil Bersih (Corruption Clean Certificate) for two consecutive years?” (Malaysiakini).

Sin Chew found its gut to put in a piece comparing the gracious Dr Koh Tsu Koon and Khir Toyo(L)
The former Selangor Menteri Besar cried when the election results on Saturday (8 Mar) was revealed. But he did not admit defeat and congratulate the winner like other leaders. He also did not come forward to pass the regime to the new state government.
Mr Cry baby turned vindicative today.
I caught a glimpse of his fiery speech over the TV while lunching. He seemed serious. Why can't he be this serious when he was the MB? Just because he did not deliver and every body voted against him, he want to do that same to the next chap.

"Mommy!! see!! He also like that."
" There is now more non Malays in the lineup, so we can't be religious any more".

Mr Toyol, nobody can be as in denial as you.
Even you want to lie about the botox. 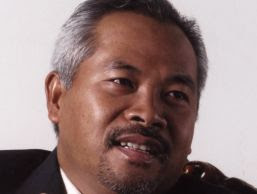 The dark prince when he first came to serve as the MB. He was the mentee of another corrupt Selangor MB. 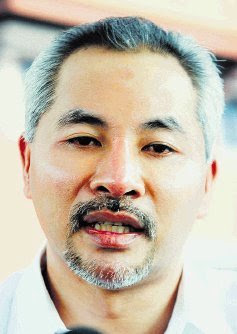 Older, and fairer ..with less lines. He attributed this overnight transformation to eating healthy and jogging. Right...

Your new name is Shredder. Beware, the Ninja turtles will haunt you back.
Oh, just lost my sympathy for the ruling party in a flash. Their arrogance is back.
at Wednesday, March 12, 2008 No comments:
My Tags: Khir TOyo, liar, Selangor Government, shredding
Newer Posts Older Posts Home
Subscribe to: Posts (Atom)