Worst flood in Baram, Sarawak since 1963

Update 3: Long term sustainance.
1. Coordination with local authoraties - esp. Irrigation / agriculture authoraties on bank works / seeds for the Ikang community. In less than 6 months, they were flooded twice and destroys their crops. The sense of L Ikang is one that is demotivated. And their technology allows for once a year work ( i think there is approval for Sarawak to get funding on paddy production in MP10)
2. Contacts: in meeting with state leaders to express thoughts that it will be good for the business ( quarry, loggers) and community that certain dredging work is done at certain parts of the river. Esp at Long Ikang and Panai ( though business will not benefit as much in Panai). Silts of 1 inch plus thru fews days of flooding in Marudi, 2-3 inch in Ikang.

12th February 2009
The team assembled at CREST centre at 6.30 p.m. for an on-boarding & prayer session. Data gathering was initiated prior to obtain information on local contacts of church leaders, potential supply / distribution and logistics partner.

We were blessed to be able to obtain the help from the Borneo Evangelical Church ( SIB) throughout the trip. Our special appreciation to Reverand Justin Wan for accommodating a last minute request by canceling and readjusting his schedule.


13th February 2009
6.00 a.m. – The team assembled at LCCT Sepang for an early morning flight to Miri. The team reached Miri almost on time and in high spirit. In waiting, Reverend Justine Wan at the Miri airport. The team was focused on getting as much ground information as possible even during breakfast. With the local information, the team decided to head straight to Marudi that is basically a strategic river port town that connects Miri with lower Baram to the middle or higher Baram. The flood also hit the town and there was a risk that it maybe too chaotic for a recovering town. 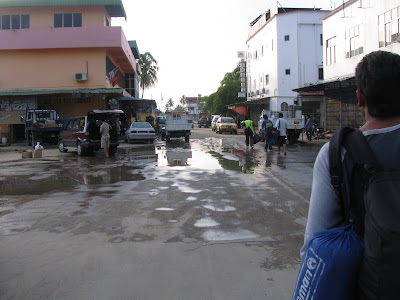 Photo: Aftermath in Marudi. And the town is located on top of a hill beside the Baram River.

5.30 p.m – The 3 hour express boat let us into the Marudi town. The newly build jetty is totally overflowed so there was a small blessing of not exerting up town on the hill. The town roads were still brownish from the flood residue leftover equipped with its own distinct complex whiff. Crews were paid to wash mud of the street and stains off the wall of shops. We managed to get a lift to the SIB Marudi church which was miraculously spared. The team held an hour-long discussion with Pastor Ayub and wife and continued on during dinner.

9.30 p.m. - After bath, the team joined the Friday prayer group to explain our intent and to garner suggestions and support. It was during this time that the congregation shared their own take on the church’s involvement where it was agreed that the church, through Pastor Ayub could be a resource. We also hear about the impact of the flood to the people of Long Panai that was covered under water for weeks with very limited help. The Long Panai school that was placed higher on a higher plain beside the village was also flooded, resulted in closure from January 2009. The headmaster, Mr. Mutha agreed to be a resource to co-ordinate with the village and village head in relieft work. We ended the day praying and supping with pastor and family.

14th February 2009
6.30 a.m. – After a night of sleep in the comfort of the church guest room, the team headed our to the jetty. After breakfast, the team parted with Reverend Justine and Pastor Ayub. We manage to find the proprietor of express boat who after hearing the story, decided to reduce a day charge of rent to RM3K.

1.30 p.m – After a 3 plus hour trip up the river, we arrived in the small village of Long Lama. Pastor Thomas is the Co-ordinator for the SIB central Baram region and he waited for us. We had our discussion with him and have to let him go to attend to his dad who had fell down in his home village ( 3 hours away up on the hillside). We were supposed to meet Pastor William as it is a village that is affected. Since he is not around, we were then introduced SIB Long Lama pastor, Pastor Willie. He then gave us more ground news especially on Long Ikang, which we analyze as potentially another area of real needs. Using a 6 foot boat, we powered downstream to assess the damage and to validate ground talks.

On arriving, we notice a village that was devoid of cheer. The only noise came from the children as the adults were taking a break. Soon, we met the 60-70 year old village head named Liban Jalong. We asked permission to view his house and saw the mark of a high level of flood. We also saw photos of his glorious past as a warrior of the Kayan tribe.

Trying to make the best of the time, we make way to access the damage done on the crops. Luckily, the villagers cleared off a trail that morning and the team could actually walk to the plantation and fields. 2-3 inches thick of wet & smelly brown/ black mud covered the whole landscape in the village and posses a sticky challenge to whoever who dares to try. We notice that the generator room was quiet and would have been submerged. Old villagers were trying to wash of the dirt from the houses manually and the strain of such effort is evident. Beyond the path, we can see marks of the flooding on the plants. From ubi, corns, cocoa to other local vegetables, the leaves were covered with mud stains. Expect rot to set in soon to magnify the problem. The thick mud covers the areas below trees, rendering many areas inaccessible.

Soon, we come to the paddy fields where we witness the destruction of a maturing paddy crops. 500 acres of paddy were planted and about 80% were ‘destroyed’. (we also learn later that night that the same village was hit by a smaller flood in Sept/ Oct 08 when the paddy saplings were coming out. They have to replant the whole 500 acres again). The double whammy would mean that they would not be able to have harvest this year; a catastrophe for a village highly depended on their paddy harvest yet unable to move beyond a once-a-year paddy technology. The image of the village head, with lower eyes, saying that “saya tak tahu apa lagi nak buat” ( I have no idea what else to do) shows a warrior leader demoralized. In fact, half the population of the village has left the place to look for jobs in towns so that they can earn some money. We also saw that the flood affected the farming equipments. By estimation, an acre of paddy would require 7 gantangs of seedlings to produce enough paddy saplings, which will come out to 1.5 tonnes in total. At the current moment, this village does not have any seedlings left for their September planting season. It is indeed a village on the throes. Even as we left with promises to do something within 2 weeks, we knew that it should come sooner. The village head was very thankful that he even wanted us to stay back and share a meal with the little that they had. 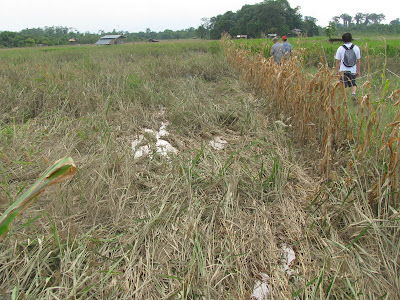 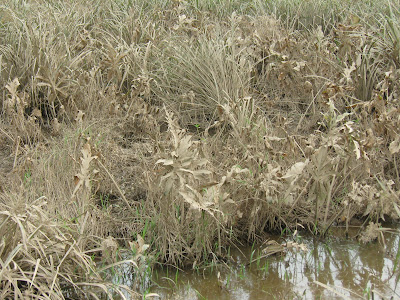 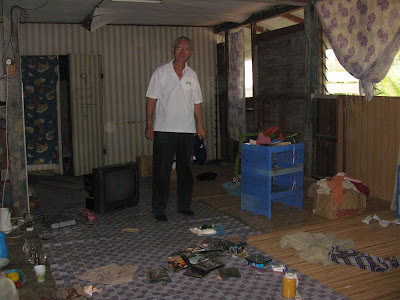 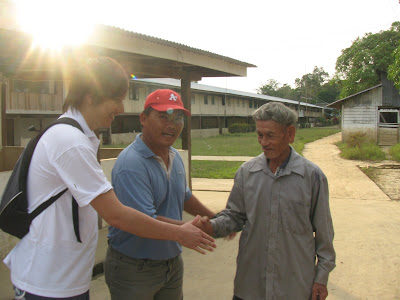 Photos: Wait till the rot sets in. The whole place will stink and there are other potential consequence in terms of health & access to their drinking water. TC visits a house and see basic living.

6.30 p.m. – The team found the Long Lama village through the darkness. After paying of the boatman, the team decided to hunt around for supply stores. 2 shops were open and both did not have enough supplies. The other shops are already closed. Over dinner, we explored options and Pastor Willie helped us tremendously. He tried to get drivers for the church boat, which proved futile. And he got us connected to a shop owner, who then called around and got the driver of the express service. Mok Chow Meng was a gracious man who gave us a solution to our challenges. He convinced the driver of the express boat to allow us to have 15-20 minute stop and even talked to the owner. He also introduced us to a local grocer, Marudi Cold storage whose owner came down to open their shops. They then make arrangement to carry the RM4.7 thousand worth of goods and food to the express boat, in the quietness of the night. The catholic owner gave us some discounts on the price and we also met a SIB Chinese department lady who operates a clothes shop nearby. We were not able to visit the theology school in Long lama.We finally had our bath at 11.00 p.m that night. 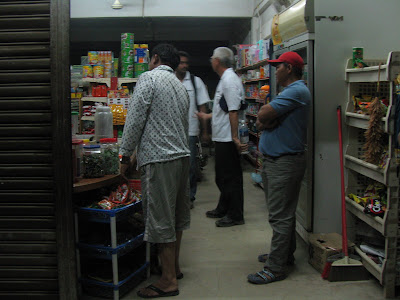 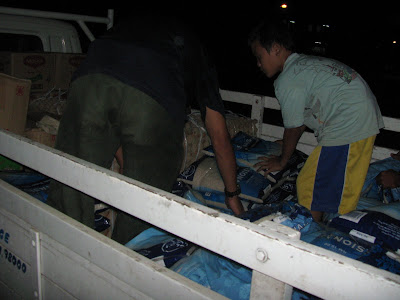 Photos: The shop open for us and kids helping to load the truck

15th February 2009
6.00 a.m. – Rise and shine as the team gears up for a fast lifting exercise. After another kolok mee breakfast, the team were at the jetty and helped (a bit) of the loading process. The Kayan kids seemed to do a better job than us. Pastor Willie came down with Elder Lah and Deacon to great us farewell as we sat on the 8.00 a.m. express ferry. 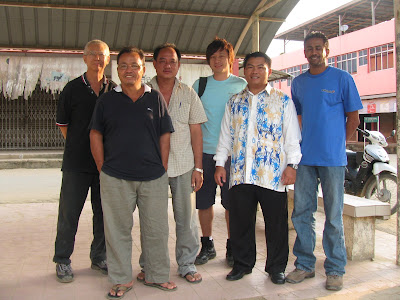 Photo: With the Long Lama team

10.00 a.m. – The express driver gave loud horn sounds to invite the villagers to help. None came as they were not expecting us and there is no way to contact this village via phone as there is no communication line nearby. They were also probably having the Sunday mass. The store send one of the Kayan kids to help and Elder Lah and some other people also aided us. Soon, Steve and Elder Lah got the villages to come down to the riverbank and the they formed a chain of people to unload the good and foodstuff. We had a short chat with the village head that was now beaming with surprise and happiness. He kept on thanking the group and said that he was shocked. The male villagers also shook out hands as we had to embark back to the boat. 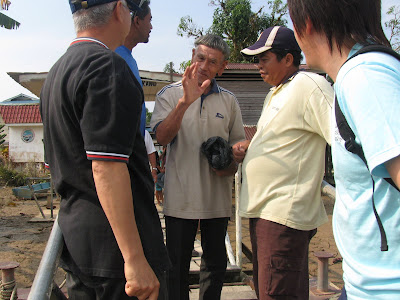 Photo: Very thankful and shocked at the speed of help.

12.00 p.m – We manage to catch the Kuala Baram express without time for lunch. Manage to meet some people from Marudi and Long Panai ( my foster family).

3.00 p.m. – Arrive at the Miri town and went to look for lunch. We had time to stroll about and to have more coffees. Air Asia sent notice that the flight was delayed to a later time.

7.00 p.m. – Check in the Miri airport to find out later that the flight is again delayed.
And again. And again. ( Thanks Tony)

12.40 p.m. – Finally, able to catch the car back to Puchong/ Damansara where we stayed. Taxi would be exorbitant by then so it is a huge plus that Shi could come down to LCCT to get us.

People in Peninsular are still not feeling it...
http://www.malaysiakini.com/news/98522

And yes, it is the logging
http://anilnetto.com/accountability/more-deforestation-as-timber-export-target-doubled/

And the fish are dying too... ( not really a funny account) http://kopisejuk.blogspot.com/2009/02/damn-funny-news-ever.html

These are the small news that trickle from the worst Baram flood since 1963 where else, the mainstream mass media seemed indifferent.