When Malaysian schoolchildren are forced to demonstrate 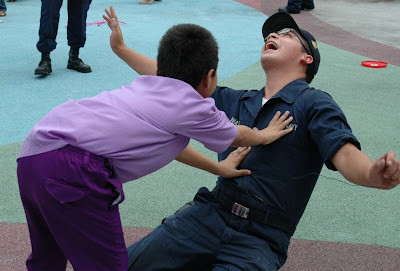 Parti Sosialis Malaysia (PSM) today slammed Education Minister Hishammuddin Hussein for plans to use schoolchildren to protest against the on-going crisis in Gaza. In a statement issued today, the party’s secretary-general, S Arutchelvan, said the organisers of the protest could also be accused of ‘exploiting’ the children, just like Jaringan Rakyat Tertindas (Jerit) had been previously. Yesterday, English-daily New Straits Times reported that the education minister is planning a nation-wide protest against Israel’s actions in Gaza, involving about five million children and 360,765 teachers from more than 10,000 schools. Hishamuddin said the protest would prepare them for "global issues like peace, environment and the economic crisis". Arutchelvan, however, was not amused with the statement, arguing that the minister should get parental consent before involving children in such "dangerous" activities. "Do the children have consent from their parents as it seems that the minister has made the decision without even consulting the parents." (Source: Mkini)

JERIT got the brunt of the accusations by UMNO and Utusan for allegedly mis-using minors to demonstrate. Teenagers of 15-20 years old made their decision with their parent's consent yet they were caught by police and subjected to massive intimidation by the police force. The CPO of Selangor even claimed that the Sultan of Selangor is upset at the organisors. I wonder if the Sultan of Selangor is going to feel when 5 million schoolchildrens are forced to assemble or walk on the streets against their will and without their parent's approval.

Here lies the hypocrisy of the current government. Children from primary and even until university are given the green light to engage in demonstration against Israel. Again, we are missing the forest for a tree. The decision makers are making a huge mistake by using a communist approach for a democratic right.