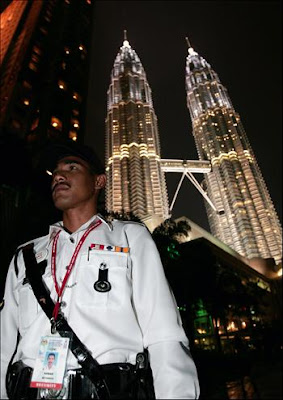 Today is Sunday. I have managed to avoid blogging on any hot subjects of last week. 3 big events that happen last week that created a lasting impression and knocked KLCI further down the rung. First, the paranoid decision on Monday that created mothers of all traffic jams in Klang valley, estimated at millions of ringgit in opportunity lost. Then the debater who won the first televised debate was captured ala SWAT style on Tuesday. On Wednesday, blogger extraordinaire of Malaysia Today was captured and charged. And we are only halfway thru the week.
However, I would wish to bring out the need to reform in our police force. Indeed, some joked that PDRM ( Polis Di Raja Malaysia) should be called PRDM .. Polis Raja Di Malayisa ( Police, the king in Malaysia). The mind boggling actions of our once respected law enforces turned into despair and frustration. Selective enforcement and random decision making makes it tougher for the Malaysian citizen to give them the benefit of doubt. Indeed, the writting by Tunku Abdul Aziz today "Arrest police's fall from grace" reflected many people's grievence over the week.

"This confirms what I have always said about our sloppy management of public relations and information generally.The severely-battered police image took another self-inflictedbeating, which could have been avoided without sacrificing the objectof the whole exercise, which was to take Anwar into custody.The right of arrest under the law, in circumstances that warrant it,is not in dispute here.
As we all know, police powers are wide andoften abused with impunity, but surely, the manner of the arrest wasexcessive.One of the most important tenets or doctrines of ethical policing is the principle of proportionality. It is about time police training gave greater emphasis to human rights issues so as to create publicconfidence.The police cannot succeed without the cooperation and support of the public, and as long as the police continue to over-react, they willnever be accepted as friends and protectors, to the detriment of lawand order in our already crime-ridden towns and cities."

-"Contemporary policing demands much higher standards ofprofessionalism, ethical behaviour, self-worth and honesty than in the past".
-"The police need strong, visionary leadership that is prepared tosubordinate individual preferences to the larger interests of thenation".
'".... have convinced me more than ever thatthe most important recommendation of all, the setting up of anunadulterated Independent Police Complaints and Misconduct Commission,must not be delayed any longer."
Indeed, the cost of incompetence is very high and the time is nigh for the police force to look at itself and do better. The millions of taxpayers's ringgit have been invested into buying new techonologies, cars, etc. , and there is a need to make the best use of the resources that the people have paid for. We also paid for your salary ( though not much) and other benefits. Some housing residences are now paying guards to guard their neighbourhood. May we not see the day that the taxpayer paid organised thugs for protection and instead of the police.
Would the Real Police force please stand up?
at Sunday, July 20, 2008 4 comments:
My Tags: Malaysia, police farce, police force
Newer Posts Older Posts Home
Subscribe to: Posts (Atom)