Abdullah getting married in a timely manner

Less than 6 days later after the court decided in favour of the Islamization process , Prime Minister of Malaysia decided to marry Jeanne Abdullah. Coincidence on the timing? 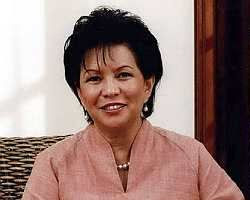 Congrats PM .. u got what u want....
Here is PM's retort to suggestion of biased judgements
The Prime Minister said the Government did not exert any pressure on the judges.
When asked about critics who said the decision was political, he replied: “They must have a hole in their heads if they say it’s a political decision.”
He said no one had hoped for or pressured the court into making any political decision.
“That is emotions (talking). If people allow themselves to be influenced by emotions, they will think of all sorts of things and suspect this and that and make themselves uneasy,” he told reporters after chairing the Umno supreme council meeting yesterday.
Well, i must be too emotional about the whole affair but what if.... Anyway, the fact is that PM's marriage has been discussed in the web and even the name of his potential wife has been mentioned. Sometimes theories are actually truth twisted about. Sorry, but am not too confident on the integrity of the judicial process involved.

And here is common sense from the Bar Council
The Bar Council supports the minority judgment of Chief Judge of Sabah and Sarawak Richard Malanjum that no court or authority should be easily allowed to have implied powers to curtail rights that are constitutionally granted.
Its president S. Ambiga said the Federal Constitution “is and must remain in law, supreme.”
“In an event of any inconsistency or conflict between the provisions of State Enactments and of the Federal Constitution, the latter must prevail,” she said in a statement yesterday.
Anyway, while PM gets to marry his new love (of course, with the French lady converting in the process) ... Lina will not be able to do the same in Malaysia. That is equality. In Malaysia, it seems that equality is only if you are rich and famous.
at Wednesday, June 06, 2007 No comments:
My Tags: Abdullah, Bar Council, Conspiracy, Equality, Jean Abdullah, Lina Joy, Marriage
Newer Posts Older Posts Home
Subscribe to: Posts (Atom)