Who would you give an "A" grade to?

Here is a hypothetical game. Imagine you are the Law teacher for these 2 chaps below and you read thru their latest homework. They are supposed to give their judgement and write down their reports. Which report do you think is more accurate and deserves the thumbs up for applying law to the book?

If you taken 5 minutes to read each files, you will come to the same conclusion and perhaps similar to that in the law fraternity . That they respected the judgement passed by the dissenting judgement. It is easy to see why. As a non law competent person, the level of detail and logical work is much more evident in Richad Malanjum's writting. Btw, Ahmad Fairuz is the Chief Judge in Malaysia which makes the reading more painful.


Victims so far.
1. Lina, born in a Malay family, cannot choose another religion unless it is sanctioned by a religious court which criminalises apostasy. Is a person born into a belief system, or is it because the parents indoctrinate their children to follow their belief? How much freedom was given to the children to choose their own religion when they reach an age of maturity? A person of true faith does not accept doctrines uncritically. And a religion worthy to embrace will be able to withstand critical examination.
2. Now we have a Zulhadi Omar, who is Chinese but regarded as a Muslim due to a swap at birth 29 years ago to a Malay family, also want to renounce his Malay name and Muslim religion. Should he be treated like Lina?
3. Subashini Rajasingham, a Hindu wife was effectively told to submit to the jurisdiction of the Syariah Court and seek recourse through the Syariah Appeals Court to stop her Muslim convert husband from converting their children without the wife’s permission. Can Muslims expect a non-Muslim to submit to the the Syariah Court? How can children at such a young age decide whether they should follow their father's or their mother's religion? Isn't it better to teach the good values of both parents' religions and let them decide later when they are mature enough to do so?
4. The case of Shamala, a Hindu, fighting custody over her children, age 2 and 4, with her former Hindu, now Muslim, husband. The Syariah Court had issued a warrant of arrest against the wife for failure to attend the Syariah Court when the husband filed custody over the children. This is yet another case of the husband wanting to convert the children to follow his religion in order to gain custody of the children, against the wishes of his former wife.5. The plight of a Malaysian woman, Revathi or Siti Fatimah, who has been forcibly separated from her Hindu husband and 15-month old baby girl on the grounds of her religion.
6. In Malaysia a non-Muslim has to embrace Islam if the other party is a Muslim in an inter-religious marriage, otherwise the marriage is not recognised by the Malays. Isn't this another form of compulsion?
at Wednesday, June 20, 2007 No comments: 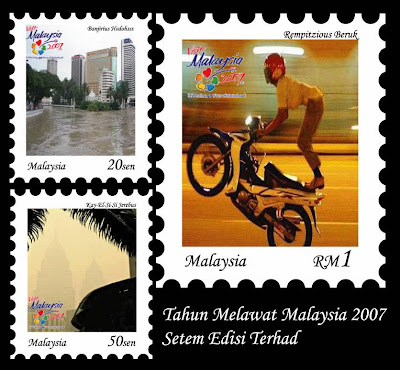