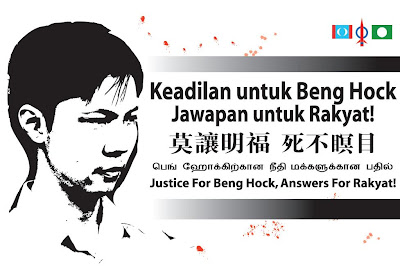 I am appalled by the death of this 30 zear old opposition chap.
Enough is said about the circumstances of his death which is highly suspicious. The police, who discounted murder 24 hours after his death did a u+turn today after the public outcry at the speed of police in absolving MACC.

We have degenerated to the state in being able to kill or intimate people to commit suicide. in either case, MACC is responsible to either murder or manslaughter. In the 1970s when the FBI were causing suidcide by carelessly targetting Americans as Russian spies, the president was forced to resign.

I just came from visiting Auswitch camp, in which 1.1 million Jews and Poles and russians were murdered. The Nazis have an ideology that they are superior. what started as an ideology in 1933 was then turned into action where they have total disregard to the inferior race. The concept of ketuanan Melayu is harmless according to our beloved politicians, and are unlike Nazism. But look at how these government servants are interpreting the worth of an inferior citizen, pushing him knowingly or to suicide by their tactics. In these camps, were were shared on the ways that the nazis pushes people to death or suicide.

Ketuanan is an ideology that must be stopped!! Sooner or later, it maz degenerate the ideas into actions and that would be too late to stop. Start respecting each human being regardless of their differences.

I am asking for at least the resignation of MACC chairman, Ahmad Said who have proven his incompetence in tackling BN related issues and extreme competence against any other parties. Najib should know that it is either him or Ahmad Said.
at Sunday, July 19, 2009 1 comment:
My Tags: racism in Malaysia
Newer Posts Older Posts Home
Subscribe to: Posts (Atom)