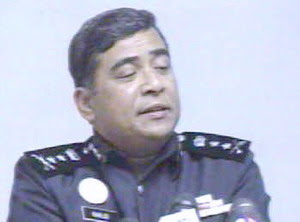 (image)
SHAH ALAM: Police will take action against Sungai Siput MP Dr D. Jeyakumar for allegedly using children in an illegal gathering in Rawang on Monday, Selangor police chief Datuk Khalid Abu Bakar said.
Thirty people were arrested in the “Cycling for Change” campaign, organised by Jaringan Rakyat Tertindas or Oppressed People Network, including Rawang assembly member Gan Pei Nei.
Khalid said 28 others, aged 18 and below, were brought to the Rawang police station while officers from the Welfare Department contacted their parents to take them home.
He added that Dr Jeyakumar was arrested later after he admitted to having organised the event which had no police permit.
He said those aged 18 and below were considered children under the Child Act 2001. ”The children were never arrested ... we saved them from being exploited,” he said. - Bernama
The Selangor Chief Police Officer has lost much credibility over the last few months.
1. Lying about close circuit TV - Selangor CPO not telling the truth
2. Lying about police action in making arrests during Negaraku -Selangor CPO Khalid Should Resign For Insulting National Anthem and Lying to Public
3. Lying abut using excessive force used- CPO: We used minimal force to disperse the crowd
4. Deny roughing up Ronnie Liu " if this is rough treatment, it is provided by law"
5. Selangor CPO implies that kids are better off in custody of cops than parents?
6. " I don't believe" without investigating, when accused by family of Ng Yee Ping .
I find it extremely tough to trust his words on the handling of the JERIT cyclists. This CPO has repeatedly caught with this pants down with unbelieveable explaination of the events. Did observe that he would fully trust 'his people' and be very defensive on any suggestions or wrongdoing or mistakes. But as a leader of a force that requires honesty, integrity and good judgement, Datuk Khalid were seen wanning.
at Tuesday, December 16, 2008 2 comments:
My Tags: Datuk Khalid Abu Bakar, liar, Selangor Government
Newer Posts Older Posts Home
Subscribe to: Posts (Atom)